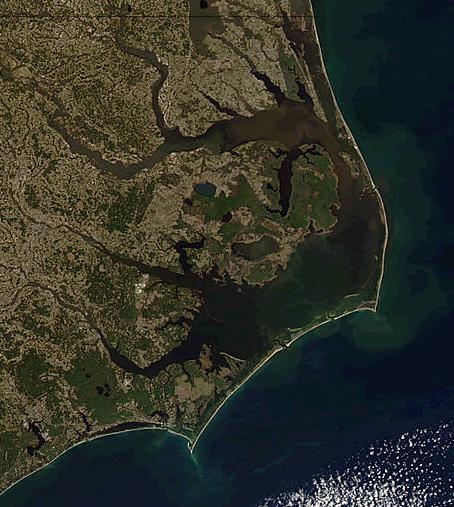 The Outer Banks (frequently abbreviated OBX) are a 200 mi (320 km) string of barrier islands and spits off the coast of North Carolina and southeastern Virginia, on the east coast of the United States. They line most of the North Carolina coastline, separating Currituck Sound, Albemarle Sound, and Pamlico Sound from the Atlantic Ocean. A major tourist destination, the Outer Banks are known for their wide expanse of open beachfront and the Cape Hatteras National Seashore. The seashore and surrounding ecosystem are important biodiversity zones, including beach grasses and shrubland that help maintain the form of the land.

The Outer Banks were sites of early European settlement in the United States and remain important economic and cultural sites. Most notably the English Roanoke Colony vanished from Roanoke Island in 1587 and was the first location where an English person, Virginia Dare, was born in the Americas. The hundreds of shipwrecks along the Outer Banks have given the surrounding seas the nickname Graveyard of the Atlantic. The Outer Banks were also home to the Wright brothers’ first flight in a controlled, powered, heavier-than-air vehicle on December 17, 1903, at Kill Devil Hills. During the 20th century the region became increasingly important for coastal tourism.

The Outer Banks are particularly vulnerable to sea level rise and coastal erosion; the effects of climate change compounds existing coastal erosion caused by poor coastal management and construction practices. In some locations on the banks, sea levels rose 5 inches from 2011 to 2015. Some sections have significantly eroded already, with portions of Hatteras Island at 25% of its original width as of 2014. Tropical storms like Hurricane Irene in 2011 have already destroyed significant infrastructure and property.

Submit a review of Outer Banks

This article uses material from the Wikipedia article “Outer Banks“, which is released under the Creative Commons Attribution-Share-Alike License 3.0.