A Driving Loop Through the Heart of Virginia

They say Virginia is for lovers. Well, if nature and history are what you love, then you’ve got a match made in heaven with Old Dominion. Point just about anywhere on a map of the state, and you’ve got the makings of an amazing trip.

This guide focuses on one epic loop through the middle portion of Virginia. We won’t be able to cover everything that falls within this spectacular region, but we’ll highlight some of its biggest attractions. The trip’s easily extendable, so, if you have more time, you could add in destinations such as Mount Vernon to the north or Virginia Beach to the south.

For those flying into Richmond International Airport, we’ll start our journey here in the state capital. There’s plenty to see and do in Richmond before hitting the road.

The Virginia Museum of Fine Arts is a world-class art museum, with popular works including five Fabergé eggs as well as paintings by Degas, Cézanne and Renoir.

Hollywood Cemetery, situated on a bluff overlooking the James River, is the final resting place of Presidents James Monroe and John Tyler, while the Poe Museum features artifacts from the itinerant author’s years in Virginia.

From Richmond, we’ll drive about an hour to the Charlottesville area. The crown jewel here is Monticello, home of Founding Father Thomas Jefferson. Most will recognize the historic home from the reverse side of the U.S. nickel.  Jefferson designed Monticello in a neoclassical style influenced by Italian Renaissance architects.

You’ll definitely want to take a tour of the house and grounds. The main house is full of Jefferson’s various inventions as well as cutting-edge gadgets of the day, including a polygraph that the former president used to duplicate his handwritten documents. The tour thoughtfully presents the Founding Father’s complicated legacy, including his use of enslaved people to build and maintain the plantation as well as his relationship with Sally Hemings. 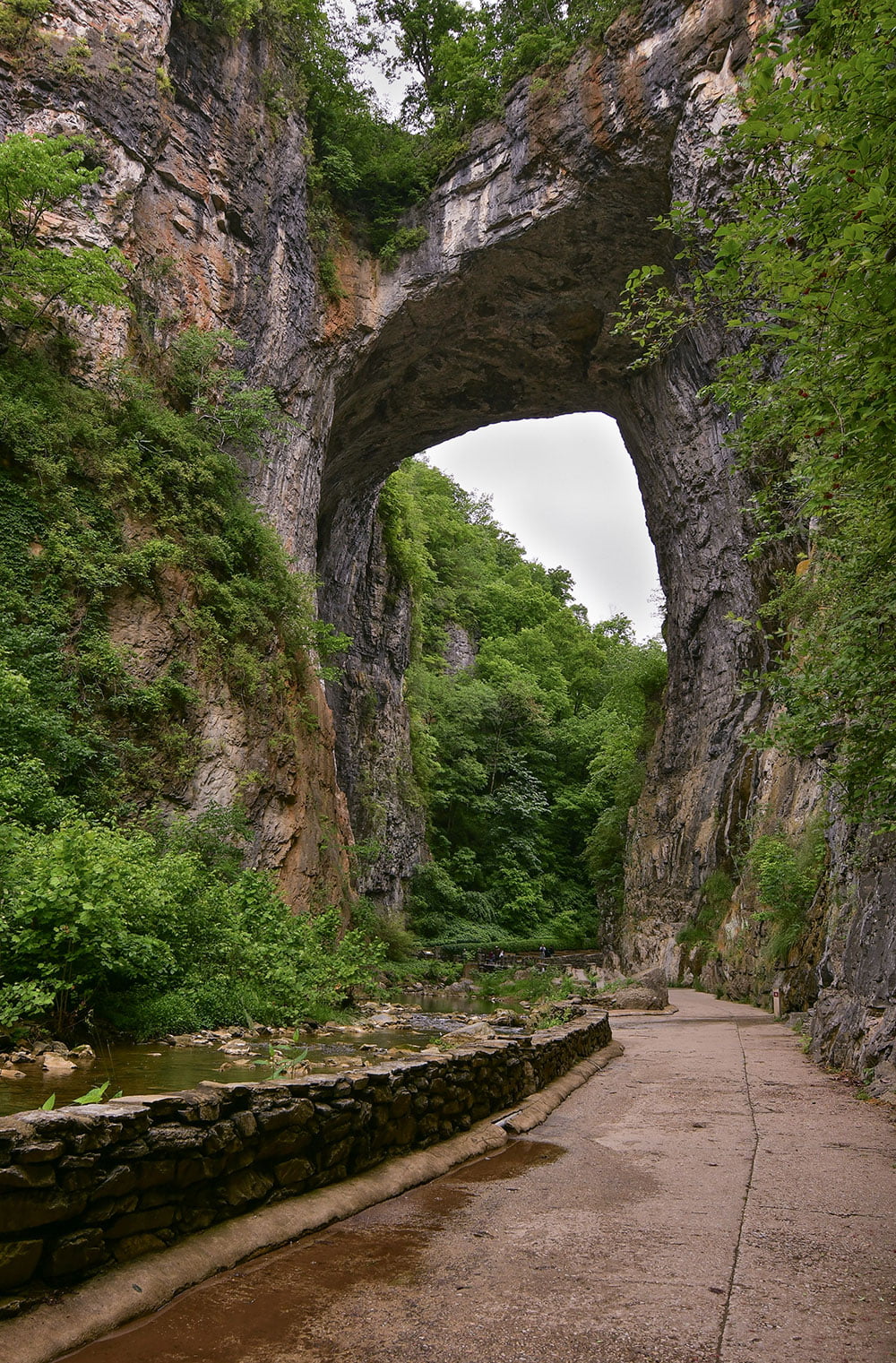 Natural Bridge is a 215-foot natural arch in Rockbridge County. Jefferson was so smitten with the geological formation that he purchased the land from King George III and used it as a personal retreat. He referred to Natural Bridge as “the most Sublime of nature’s works.”

The property is now a state park, and, in order to lay eyes on Natural Bridge, you’ll first need to buy a ticket. Once you’re on the grounds, you also can walk a series of short trails that allow you to take in waterfalls and wildlife.

Blue Ridge Parkway and the Peaks of Otter 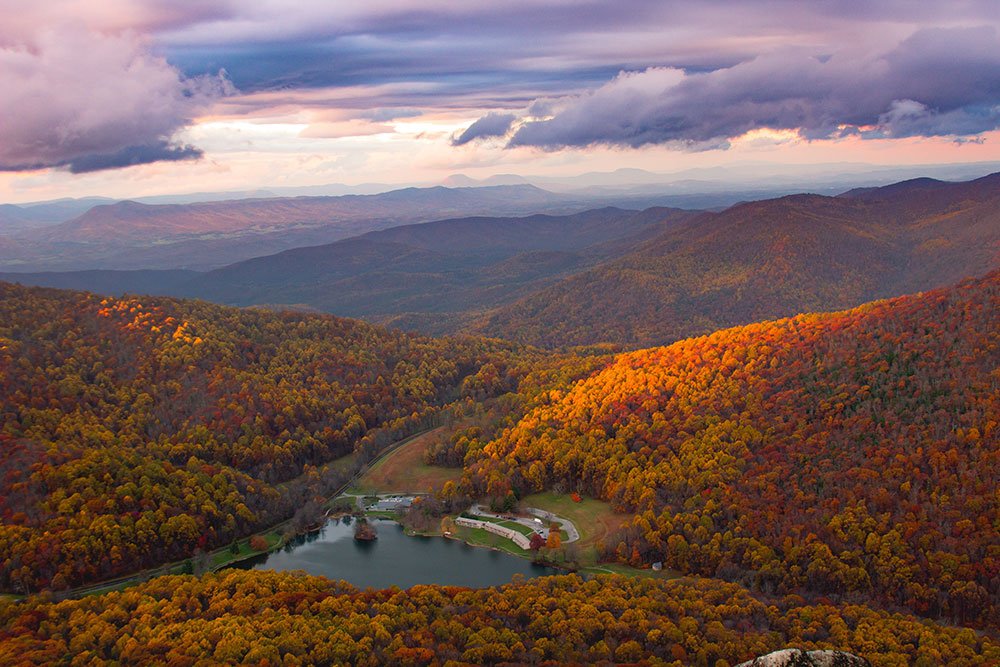 Photo by Isaac Wendland on Unsplash

From Natural Bridge, head south on the Blue Ridge Parkway, one of America’s finest drives. The parkway runs for 469 miles through Virginia and North Carolina and includes numerous pull-offs. It’s one of those drives where you want to stop at every single overlook, as each unfolding view of the Blue Ridge Mountains seems better than the last. In case you were wondering, the mountains got their name because of their characteristic blue haze, which comes from isoprene released by trees.

We’ve done a fair amount of driving to this point, so let’s get out and stretch our legs a bit more. The Peaks of Otter are three famous peaks in the Blue Ridge Mountains. Sharp Top Trail is perhaps the most popular hike in the area. It’s a 2.6-mile round-trip hike that rates as difficult, due to the steep climb up Sharp Top Mountain (3,875 feet). Your legs definitely will be feeling it both during and after the hike. Once you reach the rocky summit, you’ll enjoy panoramic views of the Peaks of Otter, Piedmont, the Shenandoah Valley, and the Allegheny Mountains.

Next, we’ll head east and into the 19th century as we visit Appomattox Court House, where Robert E. Lee surrendered the Army of Northern Virginia to Ulysses S. Grant on April 9, 1865, effectively ending the American Civil War. The Appomattox Court House National Historical Park preserves the historic village, including the McLean House where Grant and Lee famously came face-to-face. The reconstructed courthouse building in the center of the village includes historical artifacts that belonged to soldiers, including military gear, personal effects, as well as letters written to their families.

This bridge spans the Appomattox River, and—you guessed it—it’s high. One hundred and twenty-five feet, to be exact. It also runs 2,400 feet long. The former railroad bridge has been converted into a trail and offers stunning views of the Appomattox River valley.

Before heading back to Richmond, we’ll conclude our trip by visiting a trio of important historical sites from an earlier era.

Jamestown was the first permanent English settlement in the New World. The grounds of the Old Town area include the ruins of the original James Fort as well as the restored Jamestown Church. While strolling the grounds, you might even see excavations in progress, as archaeologists continue to uncover more about the early settlers and their lives. It’s definitely worth spending time in the Archaearium, which includes religious objects, tools, coins, and personal items that have been discovered over the years.

Our next stop is Colonial Williamsburg, the world’s largest living history museum. Travel back in time and pop into old-time homes, shops, and taverns, where costumed interpreters walk you through everything from blacksmithing to using a printing press. Williamsburg is a great destination for young and old alike. I’d recommend budgeting a day’s time here, since there’s lots of ground to cover.

Finally, Yorktown Battlefield is where George Washington led American and French troops in the defeat of the British to secure independence and end the American Revolution. Drive the battlefield tour roads or simply enjoy a leisurely stroll through the quaint village, which is situated along the York River.

We covered a lot of ground here, but still only scratched the surface of all that Virginia has to offer. Stay tuned to Amazing America for even more Virginia trips. Got any suggestions? Let us know in the comments section below.

Scott Tribble is a co-founder of Amazing America. He's a photographer and travel enthusiast based in Columbus, Ohio. He's visited 48 states to date (look out, Alaska & Delaware).

Reviews of A Driving Loop Through the Heart of Virginia