If you haven’t been to New River Gorge, you definitely should consider a trip. Here are just a few of many highlights from the park and its surrounding area.

Up until 2003, the New River Gorge Bridge was the longest steel arch bridge in the world. It’s still the longest single-span steel arch in the U.S. as well as the country’s third highest bridge (after the Royal Gorge and Mike O’Callaghan–Pat Tillman Memorial).

There are plenty of great vantage points to take in the engineering marvel. Start with the Visitor Center’s overlook, just a five-minute jaunt from the parking lot. You’ll get brilliant scenes at sunrise and sunset, but it’s also worth checking out during gloomier weather, when mist and fog envelop portions of the bridge and serve up a moody scene.

Long Point Trail, a moderate 3-mile loop hike, also offers a picturesque overlook. The panoramic views of the bridge and gorge from the popular rock outcrop are more than worth the effort.

The most adventurous among us will prefer Bridge Walk, a guided tour along the catwalk that runs beneath the bridge. Also, each October on Bridge Day, BASE jumpers are permitted to leap from the bridge more than 800 feet into the gorge below. Before grabbing your parachute, though, make sure to register and, more importantly, that you meet all the official requirements. 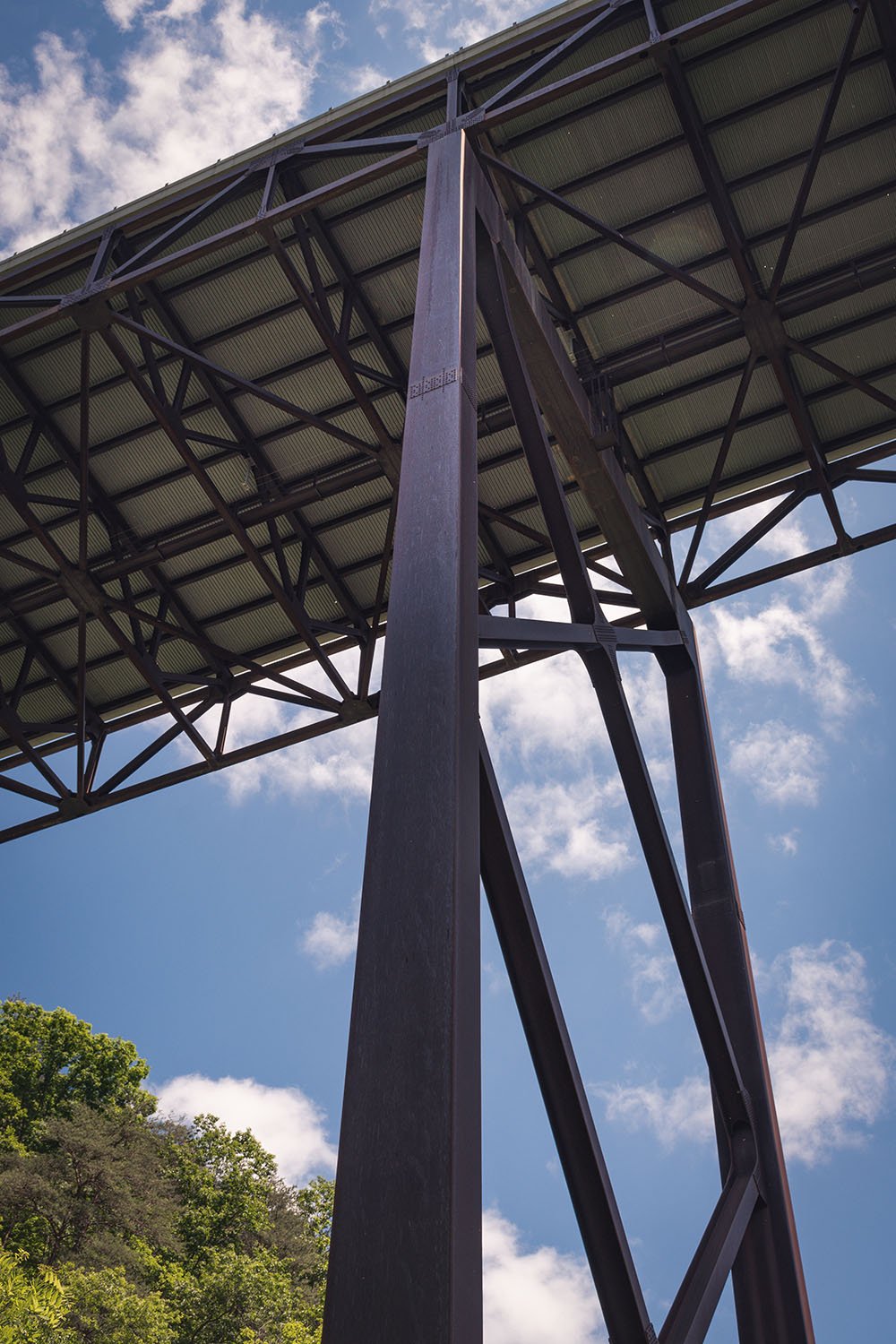 Another great option for bridge peeping is Fayette Station Road, a hundred year-old road that winds its way to the bottom of the gorge. When you’re not navigating hairpin turns along the mostly one-way road, you can see the New River Gorge Bridge from a multiplicity of vantage points. At the bottom, you can get up close and personal, taking in unusual angles and details from underneath.

They didn’t call it Averageview—and with good reason.

On first glance, the scene reminds you of Arizona’s Horseshoe Bend in the way that the river snakes around the landscape. In West Virginia, though, it’s a much more lush scene, with trees and brush carpeting the gorge. It’s especially breathtaking in the fall, when the leaves change their color.

Grandview Overlook is roughly 40 minutes from Fayetteville, West Virginia, so keep that in mind if you’re considering heading out for sunrise or sunset.

Speaking of Fayetteville, that’s the town situated in the heart of the park and the premier place to stay when visiting the New River Gorge area. A charming town of roughly 3,000 inhabitants, Fayetteville has plenty of quirky stores, restaurants, and pubs to keep you busy.

A few highlights include The Hobbit Hole (a vintage store), The Stache (an ice cream shop), and Arrowhead Bike Farm, a gathering point for adventurers that also includes a biergarten.

Glade Creek Grist Mill actually is part of Babcock State Park, but it’s absolutely worth the 30-minute drive from Fayetteville. It’s hard to prove one way or the other, but many claim that this gem is the most photographed mill in the U.S.

Built in 1976, it’s still a working mill. During visitor hours, tour guides walk you through the process of grinding corn into cornmeal.

The overall scene is like a postcard come to life. No wonder that countless couples have taken their wedding photos here, while vacationers have come from all over the world to take in the tranquil scene.

Thurmond became a boomtown in the early 1900s, thanks to the thriving local coal business. Situated along the Chesapeake & Ohio Railway, the town’s saloons, hotels, and stores catered to coal barons and business travelers. Eventually, as the coal industry declined, Thurmond dried up too, with most residents opting to move on. Today, only five people officially live there.

The town remains largely untouched from its heyday, giving visitors a rich look into our not-too-distant past.

These two waterfalls, both located on the Midland Trail, are fantastic photography spots. Kanawha Falls spans the entire Kanawha River. An adjacent hydropower facility diverts some of the river water away, but the falls still yield a steady surge and a drop of roughly 15 feet.

Cathedral Falls, on the other hand, presents a much steeper cascade of more than 60 feet. They’re situated within a natural amphitheater that imparts even more grandness to the overall scene.

Both waterfalls are easily accessible off the Midland Trail and are only a short drive from the nearby town of Gauley Bridge.

New national parks typically see a 20 percent increase in visitors, but early projections for the New River Gorge are well exceeding that mark, possibly due to loosening pandemic restrictions. Given the park’s popularity, definitely make sure that you plan ahead, so that you can make the most of your trip there. Much like the rest of West Virginia, New River Gorge is wild, wonderful, and indeed almost heaven.

Scott Tribble is a co-founder of Amazing America. He's a photographer and travel enthusiast based in Columbus, Ohio. He's visited 48 states to date (look out, Alaska & Delaware).

The Best Utah State Parks You Haven’t Been...