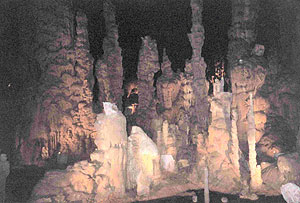 Cathedral Caverns State Park is a publicly owned recreation area and natural history preserve located in Kennamer Cove, Alabama, approximately 5 miles (8. 0 km) northeast of Grant and 7 miles (11 km) southeast of Woodville in Marshall County. The park’s main feature, first known as Bats Cave, was developed as a tourist attraction in the 1950s. Cathedral Caverns was declared a National Natural Landmark in 1972 and opened as a state park in 2000.

This article uses material from the Wikipedia article “Cathedral Caverns State Park“, which is released under the Creative Commons Attribution-Share-Alike License 3.0.