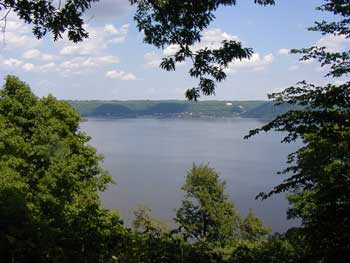 Frontenac State Park is a state park of Minnesota, United States, on the Mississippi River 10 miles (16 km) southeast of Red Wing. The park is notable both for its history and for its birdwatching opportunities. The centerpiece of the park is a 430-foot-high (130 m), 3-mile-long (4. 8 km) steep limestone bluff overlooking Lake Pepin, a natural widening of the Mississippi. The bluff is variously called Garrard’s Bluff or Point No-Point, the latter name coming from riverboat captains because of the optical illusion that it protruded into the Mississippi River. There is a natural limestone arch on the blufftop called In-Yan-Teopa, a Dakota name meaning “Rock With Opening”. Park lands entirely surround the town of Frontenac, once a high-class resort at the end of the 19th century.

This article uses material from the Wikipedia article “Frontenac State Park“, which is released under the Creative Commons Attribution-Share-Alike License 3.0.