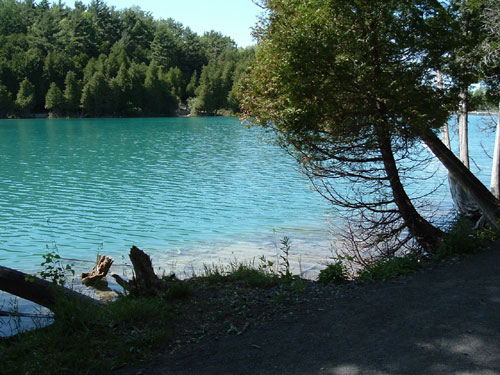 Green Lakes State Park is a New York State Park located east of Syracuse in the Town of Manlius. The park is strikingly scenic, and has a “masterpiece” golf course designed by Robert Trent Jones very early in his career. Green Lake itself is perhaps the most studied meromictic lake—one in which layers of water do not mix—in the world. The park preserves the largest stand of old growth forest in Central New York, and Round Lake has been designated as a National Natural Landmark by the U.S. Department of the Interior. The park is centered on two small lakes, Green Lake and Round Lake, which have an unusual blue-green color. These lakes lie at the base of a gorge that is somewhat longer than a mile in length. The lakes and the gorge are remnants of the ice ages, and exemplify some of the unusual geology of upstate New York. Green Lake has a surface area of 65 acres and a maximum depth of 195 feet. Round Lake has a surface area of 34 acres and a maximum depth of 170 feet. The park’s area is 1,955 acres (7. 91 km2), and it logs about 800,000 visitors each year. Nearly half the park’s area is old-growth forest, which includes many very large specimens of tuliptrees, sugar maples, beech, basswood, hemlocks, and white cedars. A grove of trees, lying immediately to the southwest of Round Lake, has been called the Tuliptree Cathedral.

This article uses material from the Wikipedia article “Green Lakes State Park“, which is released under the Creative Commons Attribution-Share-Alike License 3.0.