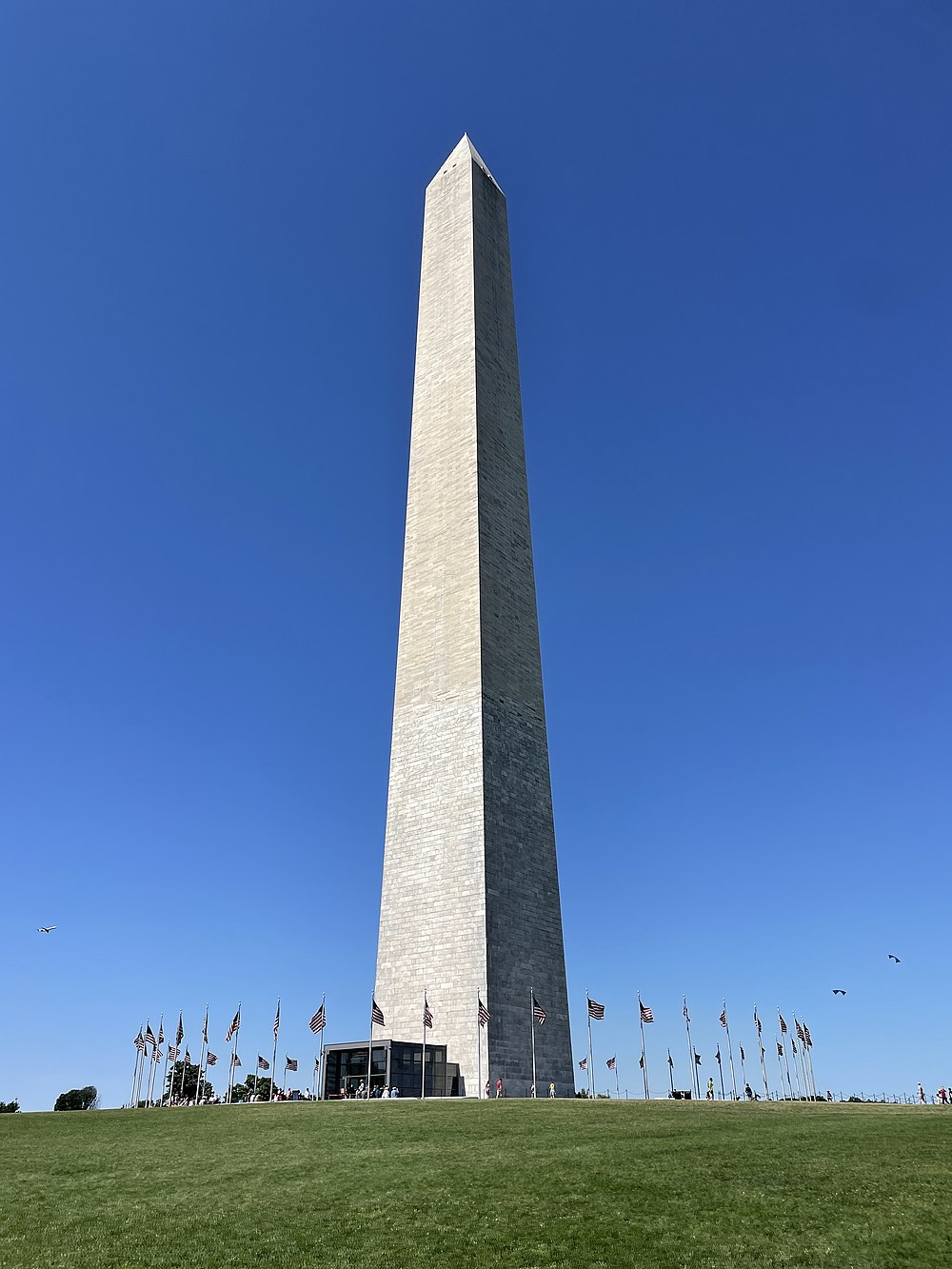 The Washington Monument is an obelisk shaped building within the National Mall in Washington, D.C., built to commemorate George Washington, once commander-in-chief of the Continental Army (1775–1784) in the American Revolutionary War and the first President of the United States (1789–1797). Located almost due east of the Reflecting Pool and the Lincoln Memorial, the monument, made of marble, granite, and bluestone gneiss, is both the world’s tallest predominantly stone structure and the world’s tallest obelisk, standing 554 feet 7+11⁄32 inches (169. 046 m) tall according to the U.S. National Geodetic Survey (measured 2013–14) or 555 feet 5+1⁄8 inches (169. 294 m) tall, according to the National Park Service (measured 1884). It is the tallest monumental column in the world if all are measured above their pedestrian entrances. Overtaking the Cologne Cathedral, it was the tallest structure in the world between 1884 and 1889, after which it was overtaken by the Eiffel Tower in Paris.

Construction of the presidential memorial began in 1848 and was halted for a period of 23 years, from 1854 to 1877 due to a lack of funds, a struggle for control over the Washington National Monument Society, and the American Civil War. Although the stone structure was completed in 1884, internal ironwork, the knoll, and installation of memorial stones were not completed until 1888. A difference in shading of the marble, visible approximately 150 feet (46 m) or 27% up, shows where construction was halted and later resumed with marble from a different source. The original design was by Robert Mills (1781–1855) of South Carolina, but he did not include his proposed colonnade due to a lack of funds, proceeding only with a bare obelisk. The cornerstone was laid on July 4, 1848; the first stone was laid atop the unfinished stump on August 7, 1880; the capstone was set on December 6, 1884; the completed monument was dedicated on February 21, 1885; and officially opened October 9, 1888.

The Washington Monument is a hollow Egyptian style stone obelisk with a 500-foot (152. 4 m) tall column surmounted by a 55-foot (16. 8 m) tall pyramidion. Its walls are 15 feet (4. 6 m) thick at its base and 1+1⁄2 feet (0. 46 m) thick at their top. The marble pyramidion has thin walls only 7 inches (18 cm) thick supported by six arches, two between opposite walls that cross at the center of the pyramidion and four smaller corner arches. The top of the pyramidion is a large marble capstone with a small aluminum pyramid at its apex with inscriptions on all four sides. The lowest 150 feet (45. 7 m) of the walls, constructed during the first phase 1848–1854, are composed of a pile of bluestone gneiss rubble stones (not finished stones) held together by a large amount of mortar with a facade of semi-finished marble stones about 1+1⁄4 feet (0. 4 m) thick. The upper 350 feet (106. 7 m) of the walls, constructed during the second phase 1880–1884, are composed of finished marble surface stones, half of which project into the walls, partially backed by finished granite stones. The interior is occupied by iron stairs that spiral up the walls, with an elevator in the center, each supported by four iron columns, which do not support the stone structure. The stairs contain fifty sections, most on the north and south walls, with many long landings stretching between them along the east and west walls. These landings allowed many inscribed memorial stones of various materials and sizes to be easily viewed while the stairs were accessible (until 1976), plus one memorial stone between stairs that is difficult to view. The pyramidion has eight observation windows, two per side, and eight red aircraft warning lights, two per side. Two aluminum lightning rods, connected via the elevator support columns to ground water, protect the monument. The monument’s present foundation is 37 feet (11. 3 m) thick, consisting of half of its original bluestone gneiss rubble encased in concrete. At the northeast corner of the foundation, 21 feet (6. 4 m) below ground, is the marble cornerstone, including a zinc case filled with memorabilia. Fifty American flags fly on a large circle of poles centered on the monument. In 2001, a temporary screening facility was added to the entrance to prevent a terrorist attack. An earthquake in 2011 slightly damaged the monument, and it was closed until 2014. It was closed again for elevator system repairs, security upgrades, and mitigation of soil contamination from August 2016 to September 2019.

Submit a review of Washington Monument

This article uses material from the Wikipedia article “Washington Monument“, which is released under the Creative Commons Attribution-Share-Alike License 3.0.