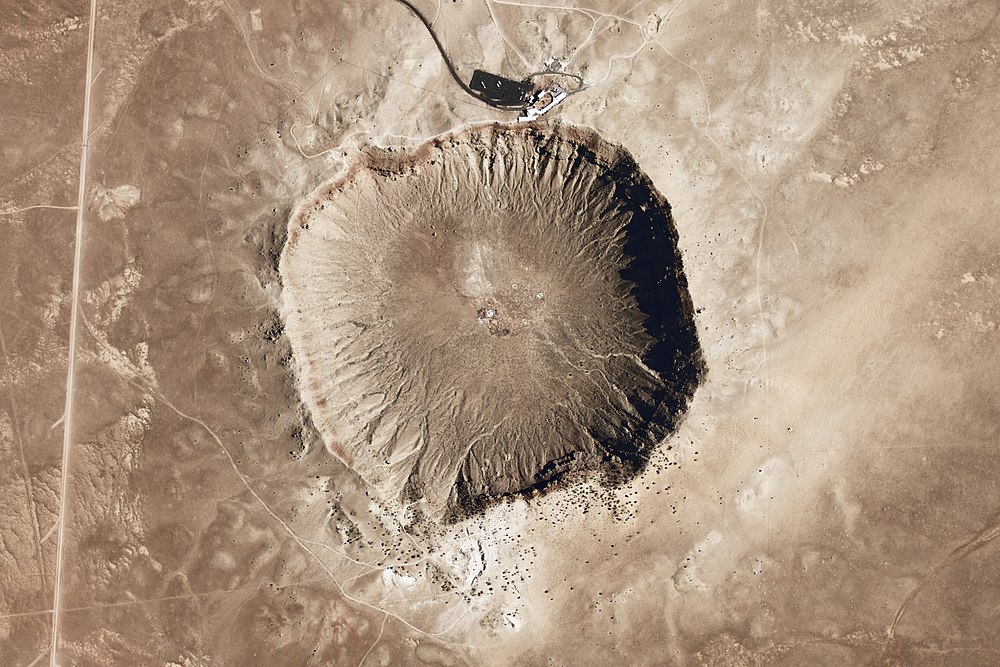 Meteor Crater, or Barringer Crater, is a meteorite impact crater about 37 mi (60 km) east of Flagstaff and 18 mi (29 km) west of Winslow in the desert of northern Arizona, United States. The site had several earlier names, and fragments of the meteorite are officially called the Canyon Diablo Meteorite, after the adjacent Cañon Diablo. Because the United States Board on Geographic Names recognizes names of natural features derived from the nearest post office, the feature acquired the name of “Meteor Crater” from the nearby post office named Meteor. Meteor Crater lies at an elevation of 5,640 ft (1,719 m) above sea level. It is about 3,900 ft (1,200 m) in diameter, some 560 ft (170 m) deep, and is surrounded by a rim that rises 148 ft (45 m) above the surrounding plains. The center of the crater is filled with 690–790 ft (210–240 m) of rubble lying above crater bedrock. One of the interesting features of the crater is its squared-off outline, believed to be caused by existing regional jointing (cracks) in the strata at the impact site. Despite historic attempts to make the crater a public landmark, the crater remains privately owned by the Barringer family to the present day through their Barringer Crater Company, which proclaims it to be the “best-preserved meteorite crater on Earth”. Since the crater is privately owned, it is not protected as a national monument, a status that would require federal ownership. It was designated a National Natural Landmark in November 1967.

Submit a review of Meteor Crater

This article uses material from the Wikipedia article “Meteor Crater“, which is released under the Creative Commons Attribution-Share-Alike License 3.0.