Organ Pipe Cactus National Monument is a U.S. national monument and UNESCO biosphere reserve located in extreme southern Arizona that shares a border with the Mexican state of Sonora. The park is the only place in the United States where the senita and organ pipe cactus grow wild. Along with this species, many other types of cacti and other desert flora native to the Yuma Desert section of the Sonoran Desert region grow in the park. Organ Pipe Cactus National Monument is 517 sq mi (1,340 km2) in size. In 1976 the monument was declared a Biosphere Reserve by UNESCO, and in 1977 95% of Organ Pipe Cactus was declared a wilderness area.

Land for the Monument was donated by the Arizona state legislature to the federal government during Prohibition knowing that the north–south road would be improved and make contraband alcohol easier to import from Mexico. In 1937 the land was officially opened as a national monument. At the north entrance of the park is the unincorporated community of Why, Arizona; the town of Lukeville, Arizona at the park’s southern border is a border crossing point to Sonoyta, Sonora, Mexico.

Organ Pipe Cactus National Monument is bordered to the northwest by Cabeza Prieta National Wildlife Refuge and to the east by the Tohono O’odham Indian Reservation.

This article uses material from the Wikipedia article “Organ Pipe Cactus National Monument“, which is released under the Creative Commons Attribution-Share-Alike License 3.0. 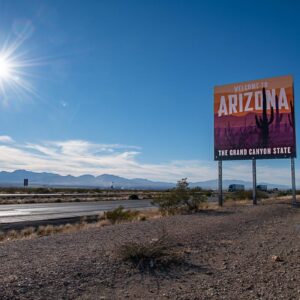