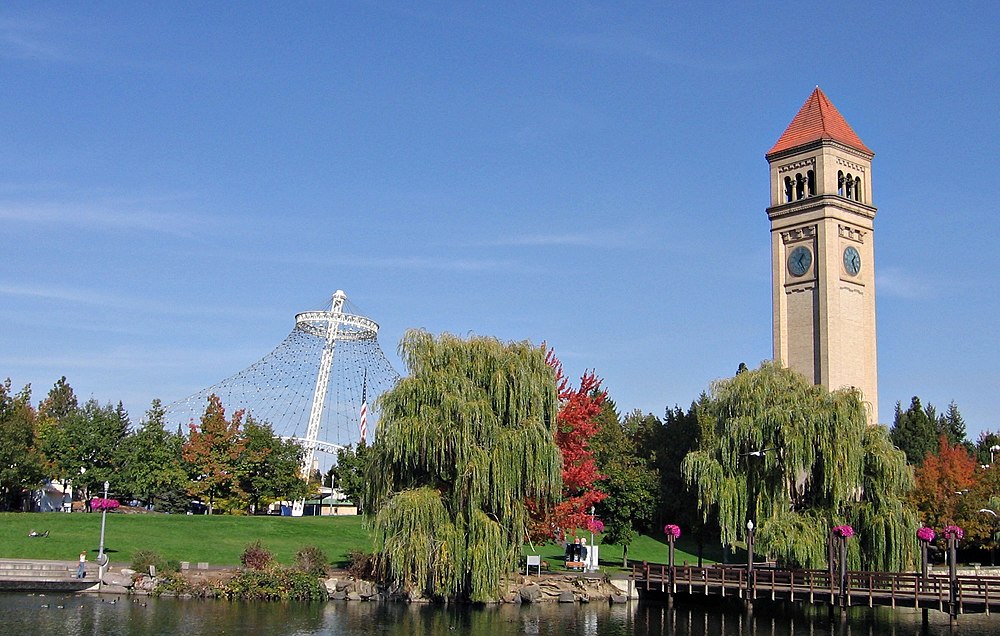 Riverfront Park, branded as Riverfront Spokane, is a public urban park in downtown Spokane, Washington that is owned and operated by the Spokane Parks & Recreation Department. The 100-acre (40 ha) park is situated along the Spokane River and encompasses the Upper Spokane Falls, which is the second largest urban waterfall in the United States.

The site of the park and the surrounding falls were a Native American gathering place, which had a number of fishing camps near the base of the falls. The first American settlers came in 1871, establishing a claim and building a sawmill near the falls that would later be purchased by James N. Glover, who was aware of the water power potential of the falls and that the Northern Pacific Railroad Company had received a government charter to build a main line through the area. By the late 19th century, much of the area along the Spokane Falls had become industrialized with sawmills and flour mills, utilizing the fast-moving Spokane River and Spokane Falls for its hydropower. Flumes and waterwheels were used to mechanically drive sawmills and flour mills located along the river. To satisfy the growing demand for electricity and modernize the city, the Washington Water Power company constructed a timber dam (replaced in 1974) on the river at the Lower Falls in 1890 and another dam on the Upper Falls in 1922. These operating hydroelectric facilities on the falls from the park’s industrial past are among the sights of interest in Riverfront Park.

Located on the site of a former railyard, the park site’s potential as a showcase for the Spokane Falls was recognized as early as 1908, but it would be another 64 years before those visions could be realized. Downtown Spokane, including what is now Riverfront Park was a hub for passenger and freight rail transport and remained that way for several decades. In 1972, the active railyards were removed, and the area around the Spokane Falls reclaimed, when construction commenced on an urban renewal project that built a fairground to host the upcoming environmentally-themed Expo ’74 World’s fair. Post-fair plans for the site which hosted the fair from May 4 to November 3, 1974, called for the preservation of the site as a legacy of Expo ’74 and converting it into an urban park after the fair’s conclusion. After several years of work to convert the site, Riverfront Park was officially opened in 1978. Several of its most recognizable buildings such as the U.S. Pavilion, Spokane Convention Center, and First Interstate Center for the Arts remain from Expo ’74 as legacy pieces. The park is also home to historic features such as the Great Northern clock tower and Looff Carrousel; other sites of interest near the park include the River Park Square mall, Mobius Science Center, and The Podium sportplex. The park sees over three million visitors annually and has a Spokane Visitor Information Center at 620 W. Spokane Falls Boulevard with maps and information on local attractions, history, and tours.

This article uses material from the Wikipedia article “Riverfront Park (Spokane, Washington)“, which is released under the Creative Commons Attribution-Share-Alike License 3.0.