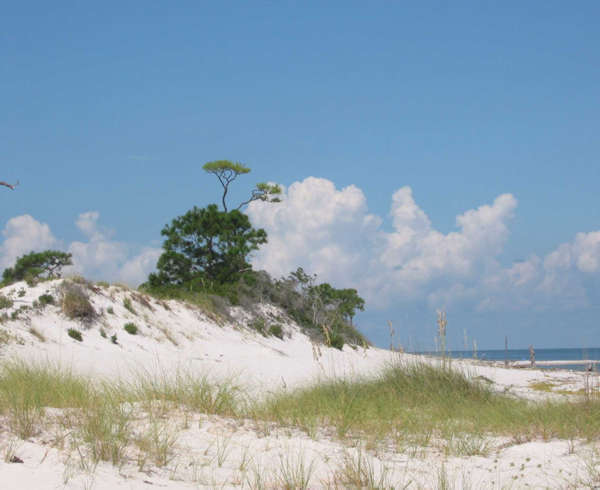 Gulf Islands National Seashore offers recreation opportunities and preserves natural and historic resources along the Gulf of Mexico barrier islands of Florida and Mississippi. The protected regions include mainland areas and parts of seven islands. Some islands along the Alabama coast were originally considered for inclusion, but none are part of the National Seashore.

The Mississippi District of the seashore features natural beaches, historic sites, wildlife sanctuaries, islands accessible only by boat, bayous, nature trails, picnic areas, and campgrounds. The Davis Bayou Area is the only portion of the National Seashore in Mississippi that is accessible by automobile. Petit Bois, Horn, East Ship, West Ship, and Cat islands are accessible only by boat. The 4,080 acres (16. 5 km2) Gulf Islands Wilderness offers special protection within the seashore to parts of Petit Bois Island and Horn Island, Mississippi.

Considerable damage to public infrastructure occurred as a result of storms during the 2004 and 2005 Atlantic hurricane seasons. In subsequent years, infrastructure was fully repaired. All roadways, parking areas, campgrounds, and visitor centers have been repaired and are fully operational. A few trails and associated boardwalks and dune crossovers were still under repair as of late 2010, especially near the Fort Pickens campground.

Hurricane Sally hit the area in September 2020 causing massive damage to the Gulf Islands Seashores. Perdido Key was hit with flooding waters that flattened out some of the dunes along Perdido Key. Johnson Beach National Seashore, part of the Gulf Island National Seashore at the east end of the island, was hit particularly hard. Many of the dunes were flattened and the end of the island was gorged forming 3 small isolated islands off the tip. Restoration projects bring in sand and vegetation to restore storm damage, though it can be a long process with subsequent storms and strong winds.

Entrance fees are charged at the entrance to the Fort Pickens area at Pensacola Beach, as well as the Johnson Beach Area at Perdido Key in Florida. The typical automobile entrance fee is US$25, good for seven days. Annual passes can be purchased for US$45.

This article uses material from the Wikipedia article “Gulf Islands National Seashore“, which is released under the Creative Commons Attribution-Share-Alike License 3.0.

Check out more in:
Beaches