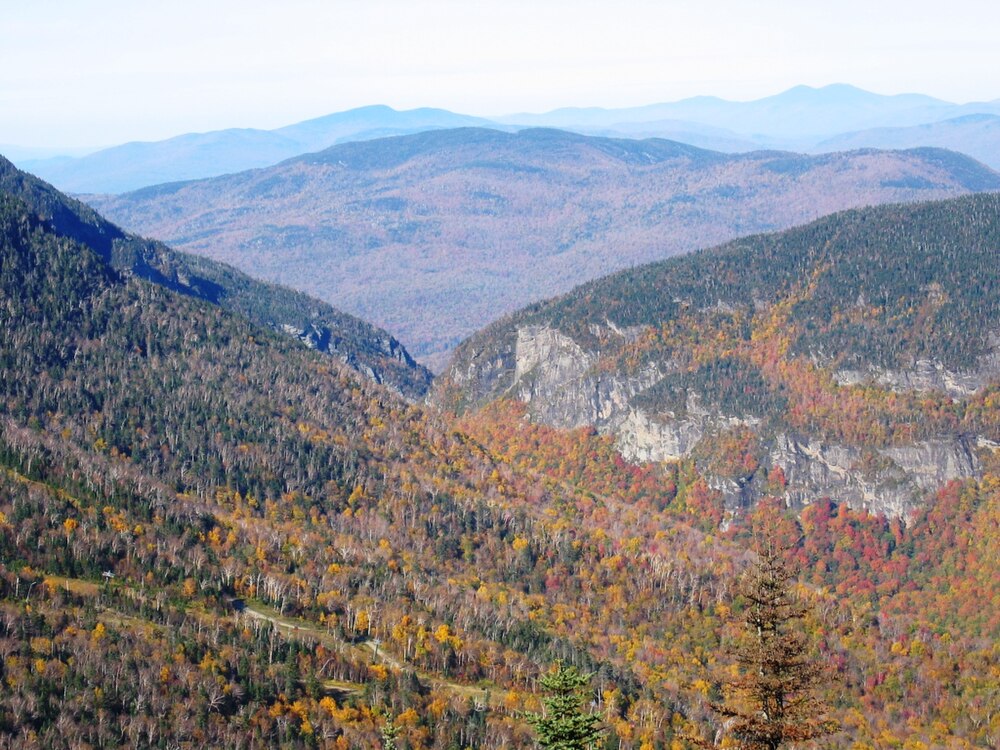 Smugglers Notch (alternatively Smugglers’ or Smuggler’s) is a mountain pass in Lamoille County, Vermont. The notch separates Mount Mansfield, the highest peak of the Green Mountains, from Spruce Peak and the Sterling Range. Most of the notch is in Mount Mansfield State Forest.

Smugglers’ Notch derives its name from activities precipitated by a request of President Thomas Jefferson to prevent American involvement in the Napoleonic Wars. The Embargo Act of 1807 forbade American trade with Great Britain and Canada. But proximity to Montreal made it a convenient trading partner, and the Act caused great hardship for Vermonters, many of whom continued the illegal trade with Canada, carrying goods and herding livestock through the Notch. Fugitive slaves also used the Notch as an escape route to Canada. The route was improved to accommodate automobile traffic in 1922 thus providing a route for liquor to be brought in from Canada during the Prohibition years.

Smugglers’ Notch State Park was created near the Notch by the depression-era Civilian Conservation Corps. In 2003 the park was relocated, allowing for a larger campground and new, modern facilities incorporating alternative energy. In order to preserve the work of these pioneering conservationists, all original structures created by the CCC were painstakingly relocated to the new site.

The Long Trail, a 272-mile (438-km) hiking trail running the length of Vermont, traverses Smugglers’ Notch. The trail down from the summit of Mt. Mansfield to the east reaches the road south of the height of the pass, and resumes across Route 108 at the Barnes Camp Visitor Center, climbing east to the summit of Madonna Peak.

Smugglers’ Notch Resort is located on the northeast side of the pass on the northern side of the Sterling Range with developments on Spruce Peak (referred to as Sterling Mountain by the resort), Madonna Peak (referred to as Madonna Mountain by the resort), and the lower portion of Morse Mountain. The resort takes its name from the pass. Stowe Mountain Resort straddles the southern end of the pass, with developments on both Mt. Mansfield and Spruce Peak.

Submit a review of Smugglers Notch

This article uses material from the Wikipedia article “Smugglers Notch“, which is released under the Creative Commons Attribution-Share-Alike License 3.0.

Check out more in:
Mountains