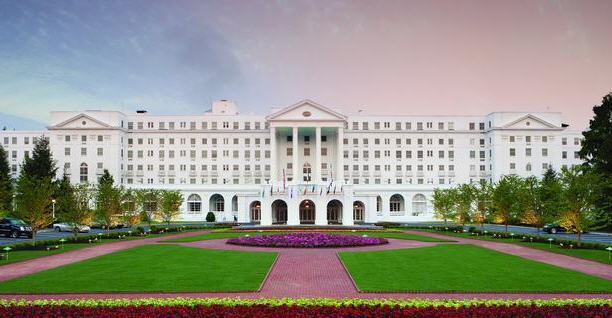 The Greenbrier is a luxury resort located in the Allegheny Mountains near White Sulphur Springs in Greenbrier County, West Virginia, in the United States.

Since 1778, visitors have traveled to this part of the state to “take the waters” of the area. Today, The Greenbrier is situated on 11,000 acres (4,500 ha) of land with 710 guest rooms, 20 restaurants and lounges, more than 55 indoor and outdoor activities and sports, and 36 retail shops. The current Greenbrier was built in 1913 by the Chesapeake and Ohio Railway and was owned for much of its history by that company and its successors, Chessie System and CSX Corporation. Following years of heavy losses, CSX had the hotel file for bankruptcy protection in 2009. Justice Family Group, LLC, a company owned by coal baron and later Governor of West Virginia Jim Justice, subsequently bought the property and guaranteed all debts, resulting in dismissal of the bankruptcy protection. Justice promised to return the hotel to its former status as a five-star resort and to introduce “tasteful” gambling for guests to increase profit. The Greenbrier Hotel Corp. today operates as a subsidiary of Justice’s company. The last U.S. president to stay at The Greenbrier during a presidency was Dwight D. Eisenhower. A total of 26 presidents have stayed at the hotel.

The Greenbrier is also the site of a massive underground bunker that was meant to serve as an emergency shelter for the United States Congress during the Cold War. The bunker was code named “Project Greek Island”.

Submit a review of The Greenbrier

This article uses material from the Wikipedia article “The Greenbrier“, which is released under the Creative Commons Attribution-Share-Alike License 3.0.